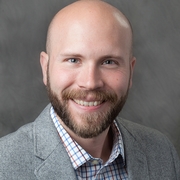 Sean Couch joined the MSU Department of Physics and Astronomy and the Department of Computational Mathematics, Science and Engineering in June 2015.

He specializes in computer similations of astrophysical processes, especially aspects of core-collapse supernovae, as well as work on the equation of state (a measure of certain properties of nuclei and physical systems dominated by those properties, such as neutron stars).

He was a Hubble Fellow at the Flash Center of the University of Chicago Department of Astronomy and Astrophysics from August 2011 through September 2014 and has been a Senior Postdoctoral Scholar at the TAPIR Walter Burke Institute for Theoretical Physics at Cal Tech.

His research team was awarded a U.S. Department of Energy INCITE allocation of 50 million core hours of computing time per year from 2015 through 2017, one of only three astrophysics projects granted allocations.