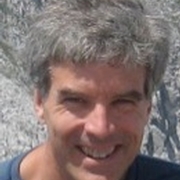 Mark's research explores how the hydrogen and helium gas that pervaded the early universe becomes transformed into the stars and galaxies we see today. Gravity draws matter into increasingly larger structures as time passes, but as stars begin to form, feedback from supernovae and supermassive black holes start to inhibit additional star formation. Mark is particularly interested in how feedback mechanisms operate in groups and clusters of galaxies. He also studies how the properties of dark matter and dark energy can be deduced from observations of the evolution of galaxy clusters.

I’m currently an astronomy professor at Michigan State University.  My journey here started in suburban Philadelphia.  I graduated from Cheltenham High School in 1979 and from Princeton in 1983, with an A.B. in Astrophysical Sciences.  My Ph.D. in Astrophysics (1990) is from the University of Colorado.  Then came three years as a Research Fellow at Caltech, two more as a Hubble Fellow at Johns Hopkins, and eight as an astronomer at the Space Telescope Science Institute, working on the Hubble Space Telescope project, before Michigan State brought me on board in 2003.