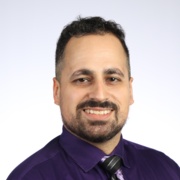 Rodriguez's research focuses on understanding how planets form and evolve by studying exoplanets, planets that orbit stars other than the Sun, and the disks of gas and dust that they form within. Using observations from NASA’s Kepler, K2, and TESS missions, combined with ground-based photometry and spectroscopy, his group will work on the discovery and characterization of new exoplanet systems that can help us understand different stages of planetary evolution. He also works on discovering and characterizing disk eclipsing systems, where a young star is eclipsed by either its own circumstellar disk or one around another body in the system (i.e. rings). These rare events allow us to directly study the interior dust around a young star and combined with millimeter mapping from ALMA, provide a more complete picture of the circumstellar architecture.