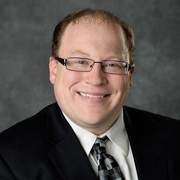 Brian O'Shea’s research focuses on theoretical and numerical studies of galaxy formation and evolution, primarily using the Enzo adaptive mesh refinement code.  He is particularly interested in the formation of the first stars, galactic chemical evolution, and the astrophysics of galaxy clusters.  He is also interested in petascale computing, because many problems in astrophysics rely on numerical simulations to make theoretical progress.  As the questions we ask become more difficult, so too must the calculations we undertake in our efforts to answer them.

In October 2016, Brian O'Shea was named a Fellow of the American Physical Society for "outstanding contributions to the study of cosmological structure formation using large-scale supercomputing, and leadership in the development of computational science research and education" after nomination by the APS Division of Computational Physics.