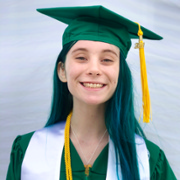 Miller’s first interest in science came from activities she did with her parents. Growing up in the rural town of Lockport, New York there was always perfect seeing for meteor showers with her father. Bedtime stories with her mother helped her broaden her imagination of the universe, and as she got older she wondered, “How many of these stories were scientifically true?” Her curiosity of astronomy and physics continued as she attended an all-girls Catholic school where she took AP physics and started a rocketry club. Club members taught themselves about how satellites get sent into space and eventually launched some of their own homemade rockets!

After high school, Miller decided to pursue a degree in Astronomy at Michigan State. Moving from her hometown to East Lansing was a little difficult at first, “There was a lack of women and LGBTQ+ folks in my year. I came from a place where it was entirely girls to just a handful, so it made me nervous to speak up or ask questions in class. I also recently found out that I have autism so I have always struggled with small talk and socializing in general.” She finally found her footing during sophomore year after taking The Science of Astronomy (AST 207) and Planets and Telescopes (AST 208) where she finally met Professor Laura Chomiuk who she cites as one of her role models.

Miller was then integrated into Professor Chomiuk’s research group and worked with Professor Jay Strader and former Michigan State graduate student, Samuel Swihart on millisecond pulsars, a unique class of neutron stars that are in a binary system with stars that are much smaller than our sun. Through her hard work and dedication, she published her first lead-author paper on a new candidate millisecond pulsar in the Astrophysical Journal.

The following year, she accepted a summer internship at California Institute of Technology as a WAVE fellow with Professor Fiona Harris and Dr. Javier Garcia where she analyzed X-ray observations of black holes. Her project as a WAVE Fellow proved to be difficult at first; “Because of the virtual dynamic a lot of the things were on me. I had to teach myself high-level physics and XSPEC, which is a terminal based software for data reduction, but my advisors and group members at Caltech were always helpful if I had a problem.” In fact, one particular moment she is proud of was writing a coding algorithm to convert hundreds of raw X-ray spectra to usable scientific data in a matter of the first few weeks of the fellowship. Her results from this project will be published next year.

She leaves Michigan State with the following advice to students who wish to follow the same career path as her: “I tell them all the time, if they want to succeed in your class or do research on campus you need to talk to professors. You can't just sit in class but you need to go to office hours and form relationships with them.”

Miller will be attending Caltech this fall as an Astrophysics PhD student where she would like to pursue a career in research while teaching and being involved in outreach. We wish her the best of luck and look forward to hearing all her future accomplishments!

The Outstanding Senior(s) in Physics or Astrophysics Award is named after Dr. Thomas H. Osgood, former Professor and Chair of the MSU Physics Department, 1941-50, Dean of the College of Arts and Sciences (before the division into separate colleges) and Dean of the Graduate School, 1950-59. Professor Osgood also was Scientific Attache at the US Embassy in London for a period.