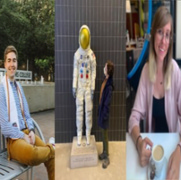 The MSU Astronomy group was honored to have three new graduate students this past Fall: Jack Schulte, Sona Chitchyan, and Sierra Casten. We talk about their journeys to astrophysics and plans for graduate school at MSU.

Growing up, Schulte would ask the dreaded “why?” questions that children would often ask their parents while growing up. The persistent questioning ultimately reached a tipping point, “They would be so worn down with my questions that they eventually just started responding with one word: gravity.” As Schulte was growing older, his scientific curiosity never left him; his mother gifted him a telescope where he would look at other planets in our solar system and took astronomy and oceanography classes in high school. He then later attended Arizona State University where he would initially major as an aerospace engineer. After a couple of semesters, he realized that he wasn’t so keen on becoming a pilot for the rest of his life and switched his major to physics with a minor in astronomy where he found that his work could directly impact the scientific community. His work as an undergraduate studying presolar stardust grains and core-collapse supernovae has already led to one publication in the Astrophysical Journal, with another one on its way. Schulte’s advice for undergraduate students is to take initiative and contact those professors who you would wish to work with in the future.

Chitchyan was born and raised in Armenia. Her love of physics started when she was young in the seventh grade, “It was mind blowing to me how we can describe physical phenomena using mathematics because I love math!” Chitchyan decided to stay on the physics and math track once she was in high school. She continued to excel in her studies and ultimately did her undergraduate degree at Yerevan State University where she majored in physics. Her first introduction to research was through looking for projects for her undergraduate thesis. Her thesis concentrated on theoretical physics and cosmology where she analyzed different modes of quantum scalar fields and how they affect the behavior of space-time. Chitchyan is currently a Fullbright scholar focused on creating simulations of Type IIP supernovae using TARDIS in Professor Wolfgang Kerzendorf’s group.

Casten spent the majority of her life in the south but from an early age she knew she wanted to go to graduate school, “I’ve always been a person who likes learning. Even in high school, I knew I wanted to go to graduate school for something but I didn't know what yet.” She entered university as a religion major but realized the philosophical questions she was asking, “Why are we here? How did we get here? What is life?” were the same questions a scientist would ask. After switching her major to mathematical physics she realized that her former undergraduate institution offered limited research opportunities and transferred to UT Austin to set herself better for graduate school. As an undergraduate, Casten was involved in a breadth of physics and astronomy research projects from rehabilitating an interferometer to hunting new galaxies. However, the project that solidified her interest in neutron stars was studying the weak X-ray pulsations of SAX J1808.4−3658, an accreting millisecond pulsar using NICER. Her advice to her junior colleagues is to remain passionate even when times are hard, “it’s 100 percent worth it.” Casten also says it’s completely normal to feel bouts of imposter syndrome, “don’t think you have to know everything,” as she says, “everyone is on the same boat and if you feel the imposter syndrome; take a breath and remember you deserve your spot.” In her free time, Casten enjoys running a science communication TikTok, @givesierraspace.

We are excited to have these accomplished astronomers in our department and we look forward to their future here at MSU.