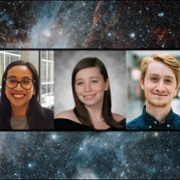 The NSF GRFP is a prestigious and highly competitive five year fellowship for PhD students in STEM fields. Applicants are required to provide a research proposal and must expound upon the “broader impacts” they will have on society. This often takes the form of outreach and mentoring initiatives led by the fellows, and is a unique requirement among national graduate fellowships.

We interviewed Panurach, Davis, and Barker, and asked them to tell us what the NSF GRFP means to them and what they envisioned for their “broader impact”.

Teresa Panurach was awarded the NSF GRFP in the spring of 2020. She joined MSU Astronomy as a graduate student in 2018 after receiving a BS in Physics from CUNY Hunter College that same year. Her research is on low-mass X-ray binaries in galactic globular clusters. “Receiving the [NSF GRFP] allows me to fully concentrate on things that align with my values as a scientist,” says Panurach, “which is doing exciting science while uplifting my junior colleagues.”

Her application’s “broader impacts” statement was aimed at MSU’s Charles Drew Science Scholarship program, which provides guidance for underrepresented undergraduate students in STEM. According to Panurach, “the program has been limited to only life and health science majors and just recently expanded towards physical science students, so efforts towards providing students with mentorship is crucial to retain physics and astrophysics undergraduates in the Drew program!”

Panurach credits her fellowship award to the support of her undergraduate mentors in the CUNY Astronomy program and at the American Museum of Natural History, as well as MSU professors Danny Caballero, Laura Chomiuk, and Jay Strader. Panurach also recognizes the support of her friends from “day one,” because, as she says, “it takes a village to raise an astronomer.”

Megan Davis also received the NSF GRFP in spring 2020 while working in the MSU Astronomy Department as a post-baccalaureate researcher. Davis graduated from MSU with a BS in Astrophysics in 2019, and as of fall 2020, is now a graduate student in the University of Connecticut Physics PhD program. Her work at MSU focused on the rapid variations in brightness that can be experienced by neutron stars and black holes, while at UConn she is now studying supermassive black holes like the one found at the center of our galaxy.

“[The NSF GRFP] truly jumpstarts my career by allowing me to start research earlier than normal and make positive changes in my department and field,” Davis says, referencing the common situation encountered by new graduate students in which they must be financially supported by teaching appointments and have little time for research in addition to their classwork. Davis is thankful for multiple past research experiences, including REU programs and an internship at NASA, and the numerous mentors she’s met along the way, including Dr. Lowell McCann at the University of Wisconsin River Falls, and Drs. Laura Chomiuk and Abbie Stevens at MSU.

Davis’s “broader impacts” statement focused on accessibility in both outreach and scientific research: making public events that anyone can enjoy and learn from, contributing to open source software for community science projects, and ensuring that underrepresented students and researchers in STEM have access to resources and support.

Brandon Barker received the NSF GRFP while a senior at the University of Tennessee Knoxville in 2019, where he received a BS in Physics and Math with a minor in Astronomy. Barker became a graduate student with MSU Astronomy later that year. He is currently studying the interiors of core-collapse supernovae progenitors using simulations. Barker is a first generation college student, and says that the NSF GRFP represents validation for all of his hard work. “[It] will hopefully help me to show others, potentially in similar situations, that they are capable, too,” he says.

Barker’s “broader impact” focuses on sharing science with first generation and low income groups. Though put on hold by the pandemic, Barker plans to work with Abrams Planetarium to visit Mid Michigan schools, particularly those in the surrounding rural communities. As an undergraduate in Tennessee, he spent five years running hands-on science demonstrations at a local Title I school. Barker credits this, along with public outreach done with the Society of Physics Students, as key experiences that shaped his NSF GRFP application. “I was able to really develop my own feel for what impactful outreach is to me,” Barker says. He also recognizes his mentors from Oak Ridge National Lab, Tony Mezzacappa and Eirik Endeve, as well as mentors like MSU Professor Sean Couch at the summer ACRES REU program.