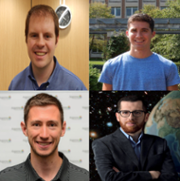 Michigan State’s astronomy group is delighted to share that we have three graduate students who will defend their PhD and one postdoctoral researcher who received a prized fellowship this year. We are thankful that these astronomers make our department a vibrant place with their scientific endeavors.

Forrest Glines is a sixth year graduate student working with Prof. Brian O’Shea on simulating cosmological simulations of plasmas within galaxy clusters to better understand the intracluster medium – the hot diffuse plasma comprising the majority of baryonic matter. His work explores feedback and magnetic turbulence from active galaxy nuclei (AGN) and methods to simulate terrestrial plasmas at Sandia National Laboratories. After finishing his PhD at MSU, Glines will be going to Los Alamos National Lab as a Metropolis Postdoctoral Fellow to explore the breakout of jets launched from binary mergers of heavyweight black holes from within AGN accretion disks using the AthenaPK code he co-developed at MSU. This work will explore whether jets launched by heavyweight black holes in an AGN accretion disk have a unique electromagnetic signature in addition to their gravitational wave signatures that could verify AGN accretion disks as a formation channel for heavy weight black holes.

Adam Kawash is a fifth year graduate student working with Prof. Laura Chomiuk on estimating the classical nova rate of the Milky Way. He uses large sky surveys to find more novae and estimate the frequency that the Galaxy we live in produces them. In the past few years, many transient surveys have been commissioned, which has, one increased the observations for finding novae, and two allowed us to more systematically study how good we are at finding the Galaxy's total population. Over the past 5 years we have found on average 13 per year, and his analysis estimates that we are finding about half of the Galaxy's novae – making the total to be 25 per year. He plans on defending his thesis in July and is currently enrolled in the Erdős Institute Data Science Bootcamp.

Mike Pajkos is a fifth year graduate student working with Prof. Sean Couch on analyzing gravitational wave emission from stellar explosions known as core-collapse supernovae. His work involves connecting features of these expected signals to the underlying physics driving an explosion, such as how the star is rotating, the behavior of the dense matter, and understanding the properties of the star before it exploded. Mike’s computational work involves accounting for magnetized material with high speeds, experiencing a strong gravitational pull.  These additions will be used to more accurately model stellar explosions and interstellar collisions; they are currently being incorporated into the openly accessible Flash-X code.  This fall, Mike will begin work at the California Institute of Technology, working with Saul Teukolsky, studying CCSNe using the SpECTRE code.

Elias Aydi has been a postdoctoral researcher at Michigan State since 2018 in Prof. Laura Chomiuk’s research group. He obtained his undergraduate physics degree at the Lebanese University and his PhD at the South African Astronomical Observatory and the University of Cape Town where he studied classical novae. He uses both ground- and space-based observations and 3D radiation hydro-simulations to understand the role of shocks in powering novae -- energetic, luminous explosions from white dwarf stars. Elias is heavily involved in outreach and has presented multiple times in the Lansing area and is one of the first Arabic-speaking astronomy content creators specifically for the Middle East and North Africa region. This year, Elias received NASA’s Hubble Fellowship with Michigan State as his host institution and plans to combine observational and theoretical analyses to accomplish his scientific goals.